EWS in the News

Increased earthquake activity has prompted the oil & gas regulator in Texas to take a tough stance on the underground injection of produced water. It signals a lasting change for water management in the Permian Basin.

In a move that is expected to further drive the adoption of oilfield water recycling in the US, the Texas Railroad Commission (RRC) announced last month that it is restricting the underground disposal of produced water in a highly productive region of the Permian Basin.

The announcement from the state regulatory body is designed to reduce seismic activity in a 250-square-mile area between the Texas cities of Odessa and Midland, known as the Gardendale Seismic Response Area. 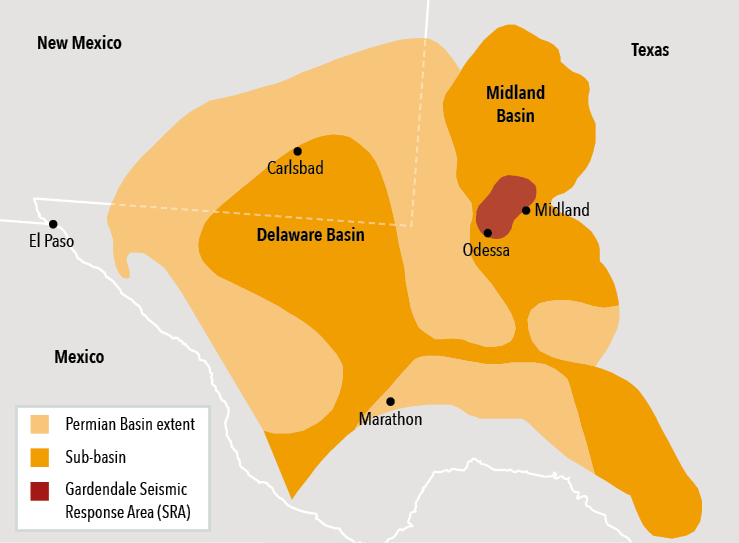 The regulation imposes a moratorium on new injection well permits in the area for at least a year, and restricts the individual disposal volumes of existing wells to 10,000 bbl/d. The decision impacts 76 permitted wells, totalling 1.6 million bbl/d of disposal capacity, which is owned by major E&P and water midstream companies such as Pioneer Natural Resources, Rattler Midstream, and Solaris Water Midstream.

Kelly Bennett, CEO of oilfield water data company B3 Insight, estimates that the 10,000 bbl/d per well capacity limit will equate to total disposal capacity in the Midland/Odessa area being reduced by 900,000 bbl/d.

With many wells in the area not currently receiving their full permitted capacity, however, the regulation is unlikely to have an immediate impact on disposal activity this year. It nevertheless heralds lasting implications for water management practices in the Permian, just as oil & gas production recovers from the worst effects of the pandemic.

“This is one of several areas in the Permian Basin with clusters of increasing seismic activity,” Bennett told GWI. “To the extent that this becomes the predominant way that seismicity is addressed, then it may start to remove water management options in other productive regions of the basin.

“The duration is also not trivial,” he added. “If there’s any kind of material growth in the area, then there’s going to have to be some degree of rebalancing of water management with respect to who takes the water and where it can go.”

Laura Capper, CEO of EnergyMakers Advisory Group, echoed this sentiment. “To me, the writing is on the wall that operators better start coming up with alternative plans to relying exclusively on SWDs to get rid of produced water. It’s a big message, because [the RRC] have taken this approach in one of the most active areas.”

Participants expect the decision to further drive the recycling of produced water, which is reused in hydraulic fracturing. Capper points to the New Mexican side of the Permian, where water recycling is already increasing rapidly due to disposal constraints. Here, recent regulations require operators to report how they source their water, which also ties in with a growing emphasis on ESG commitments.

The decision is also expected to boost investment in the water midstream model of interconnected water conveyance pipelines. “There are still only a handful of [water management] systems that have real trunk line capabilities – but that kind of investment in increased connectivity is going to be really important in order to mitigate this issue for customers and create the options to move the water away from these impaired areas,” observed B3 Insight’s Bennett.

Participants are even hopeful that disposal restrictions could create opportunities for treatment technologies such as evaporation, which reduce water volumes or treat produced water to the point where it can be reused outside of the oilfield.

“When people realise that we can’t simply take all of this water and put it back into the ground, it’s going to spur more activity around beneficial reuse, period – be that recycling, evaporation, or mineral harvesting from the brine,” predicts Beau Egert, CEO of oilfield water treatment company Energy Water Solutions (EWS).

While Egert concedes that thermal evaporation has been cost-prohibitive in the past, he argues that it has become much more competitive in the Permian due to increasing restrictions on SWD capacity – which drive up the costs of disposal – and improvements to evaporative technologies.

EWS is developing a modular mobile evaporation product for applications in the Permian with a treatment capacity of 1,000 bbl/d, which can be run in series to handle larger volumes. The technology uses high-temperature air to vaporise the produced water, and Egert claims that it can reduce water volumes by 50 to 90% depending on specific water chemistry.

He sees a role for evaporation alongside other water management strategies, in order to reduce the volumes that require disposal or to “shave off the peak” from a well flowback to avoid building more pipeline capacity.

While the writing may be on the wall for underground disposal, Capper cautions that more research is required to determine the cause – or causes – of increased seismic activity in the Permian Basin.

“I don’t think that we can conclude yet that the earthquakes in the Permian are specifically tied to injection,” she argues. “I think it’s more likely a set of behaviours that include production and extraction, pressure changes with injection – particularly deep injection – and hydraulic fracturing, all of which are happening in the same area at the same time.

“I just don’t think the science has gone far enough in order to tie a very deep earthquake to one single behaviour,” she concluded.